MATAGALPA PROVINCE, NICARAGUA — One September morning here, Unity got a glimpse of Nicaraguan democracy in action when 300 women farm workers gathered to discuss the union’s response to the country’s economic problems.

Economic conditions are harsh right now, due to the contra war, the U.S. economic embargo, and historic underdevelopment. Sylvia Dorado, a coffee picker, says she works six days a week, 6 a.m. to 2 p.m., for 196 cordobas (U.S. 50 cents) a day. Her wages won’t buy enough food or clothing for her family of six, but the state-owned coffee farm provides three meals a day at reduced prices. 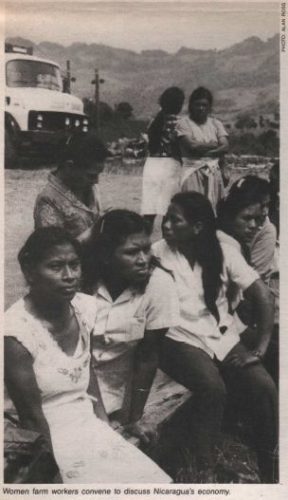 Dorado and the other women meet in a plenary session, then break into small groups. None have much formal education, but they chair their own meetings and write down the group consensus.

In the discussion, they carefully weigh how much their wages can increase without bankrupting the farms. They consider expanding child care at the state farms and extending it to the private farms.

Women farm workers are meeting separately throughout the country in order to encourage their participation in the union. The workers select delegates from each farm to attend regional meetings and, in turn, they select representatives for a national assembly later this year. By the day’s end, each small group reports to the plenary with their suggestions for increasing production, caring for mothers with sons in the army, and proposed wage increases.

“We know these problems are imposed by the war, by U.S. imperialism,” comments Sylvia Dorado. “Even with the bad conditions, it’s much better now than before the revolution. Now we have health care, child care, and help with food. Before we never had anything like that.”

Another farm worker smiles as she repeats the most popular slogan in Nicaragua today. “You know,” she says, “Reagan will go, but the revolution will stay.”