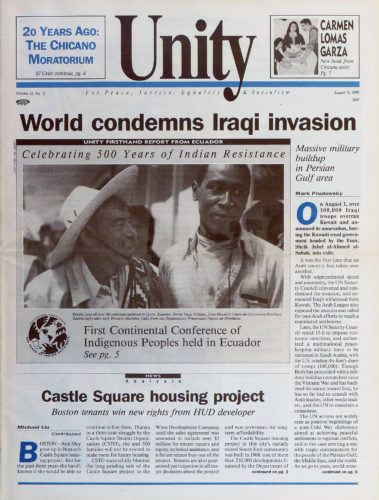 by Monica Sanchez Family Pictures, Cuadros de Familia (1990) by Car­men Lomas Garza, depicts scenes from Carmen’s childhood in Kingsville, Texas. For someone who also grew up in South Texas, the book brings back memories of similar experiences–for example, killing a chicken for that day’s dinner, going across into Mexico to shop at the mercado, […]

by John Martyn, Contributed SAN ANTONIO,TEXAS – “We got the greatest re­sponse.  Thumbs up for us and the boycott,”  said Frances Estrello of Fuerza Unida. She was describing the 125-person picket, held on July 27 outside a Miller’s Outpost here, to kick off a consumer boycott of all Levi’s products. Fuerza Unida is the organi­zation […]

by Eva Martinez, Contributed AS THE MORNING SUN broke over East Los Angeles, Raza families stumbled out of bed, drawn to the kitchen by the drifting fragrance of tortillas hot off the comal. Many planned on attending the anti-­war demonstration at Garfield Park later that day. For the organizers of the Chi­cano Moratorium Against the […]