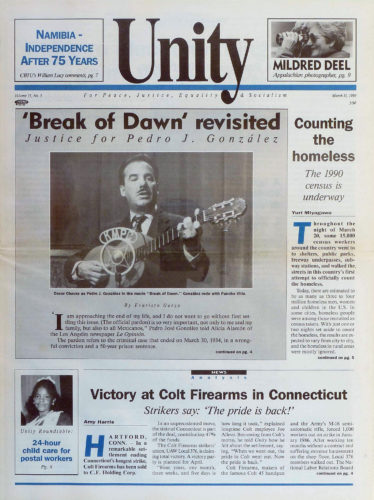 A roundtable Unity interview in San Francisco, California SAN FRANCISCO – The mail moves 24 hours a day. In postal facilities across the U.S., thousands of workers — many of them single parents or with young children — work evening and graveyard shifts. Needless to say, child care is often impossible to come by. Five […]

by Evaristo Garza “I am approaching the end of my life, and I do not want to go without first set­tling this issue. (The official pardon) is so very important, not only to me and my family, but also to all Mexicanos,” Pedro Jose Gonzalez told Alicia Alarcon of the Los Angeles newspaper La Opinion. […]

by Richard D. Castro Denver. CO–An Arizona law that prohibits foreign languages from being used in government busi­ness was ruled unconstitutional last month by a U.S. district court judge, who said it violates the First Amend­ment right of free speech. Judge Paul Rosenblatt ruled that Arizona’s official English law, which prohibits the use of foreign languages […]

Interview by Bernice Wuetrich Mildred Deel, of Southwestern Virginia, is known throughout this Appalachian region as a photographer and friend to hundreds of coal miners and their families. Mildred is a postal worker, a mother, and a grandmother. Her son is a miner, and her husband is a retired miner. Mildred’s photographs, taken throughout the […]