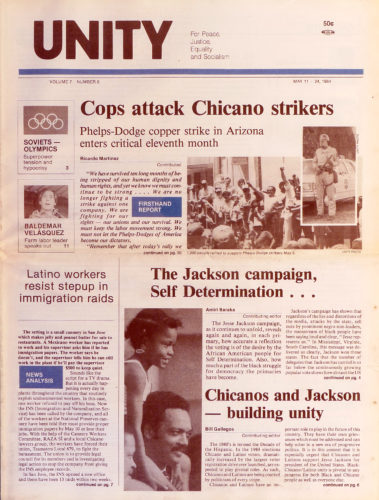 Latino workers resist step up in immigration raids Editor The setting is a small cannery in San Jose which makes jelly and peanut butter for sale to restaurants. A Mexicano worker has reported to work and his supervisor asks him if he has immigration papers. The worker says he doesn’t, and the supervisor tells him he can still work in the plant if he’ll pay the […]

Bill Gallegos, Contributing editor The 1980’s is termed the Decade of the Hispanic. In the 1984 elections Chicano and Latino voters, dramati­cally increased by the largest voter registration drive ever launched, are ex­pected to play pivotal roles. As such, Chicanos and Latinos are being courted by politicians of every stripe. Chicanos and Latinos have an […]