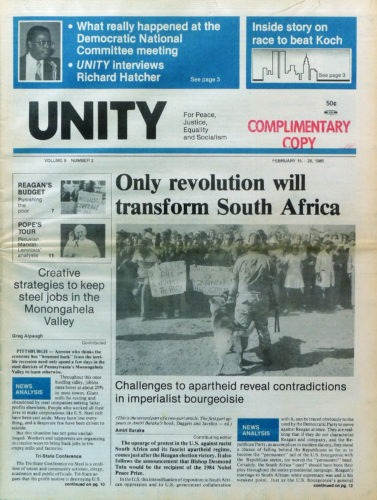 Only Revolution Will Transform South Africa

Challenges to apartheid reveal contradictions in imperialist bourgeoisie (This is the second part of a two-part article. The first part appears in Amiri Baraka’s book, Daggers and Javelins — ed.) Amiri Baraka Contributing editor The upsurge of protest in the U.S. against racist South Africa and its fascist apartheid regime, comes just after the Reagan election victory. […]

Creative strategies to keep steel jobs in the Monongahela Valley

NEWS ANALYSIS Greg Alpaugh, Contributed PITTSBURGH — Anyone who thinks the economy has ‘’bounced back” from the terrible recession need only spend a few days in the steel districts of Pennsylvania’s Monongahela Valley to learn otherwise. Throughout this once bustling valley, jobless rates hover at about 25°7o in most towns. Giant mills lie rusting and […]